Pagers or Call System Apps. Which is Right for Your Senior Living Community?

Call systems have come a long way from the old school light switches on a pull string that flashed lights and sounded buzzers. Technology advances and a trend toward homelike environments for senior care, have led away from the noxious stimuli of light and sounds, toward silent hand-held devices. These devices have the advantage of keeping noise levels down as well as ensuring that staff can receive notifications anywhere in the community.

The first step into hand-held devices came in the form of the pager or “beeper” if you’re older than 30 or remember a time before cell phones. Care staff carry pagers that beep, or preferably vibrate silently, and tell them “Emergency Call Room 101”. More advanced call systems allow features such as individual room or area assignments and call escalations to ensure the next person is notified when a call has gone unanswered. The added benefit being that not everyone in the building is disrupted when one person presses their call button.

While pagers helped move call systems away from institutional feeling care and improved efficiency, they also have their downsides. Pagers, 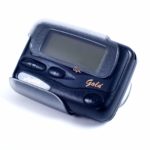 as you have probably figured out, are not commonly used anymore in the general world. With the exception of some specific environments where cell phones can’t or shouldn’t be used, they are not in great demand. They were also not purpose-built to receive 100+ messages a day or withstand the heavy usage that you find in assisted living or skilled nursing environments. There are some options for waterproof and dust proof pagers that help with the durability issues but are a little more expensive. The one big down side that many people find with pagers however is the lack of two way communication.

Pagers are the cheapest alternative but lack two-way voice communication for staff.

To fill this need for two way communication some call system vendors offer walkie-talkies. Walkie-talkies have the advantage of allowing staff to talk to each other. They can be set up to display an alphanumeric message or to convert the message from text into voice. They are great for hands free use but the computerized voices can be hard to understand and either don’t repeat enough to catch the message or repeat so often as to be disruptive. There are also concerns over the type of information being broadcast violating HIPAA policies.

Listening to the crackle of static and other people’s conversations over walkie-talkies does little for maintaining a homelike environment.

like a cordless phone you would have in your house. The difference being that at home you may lose reception the further you get from the base, whereas wireless phones can be used throughout a large building. To ensure you don’t drop calls when you move around a building, wireless phones require base stations to be installed approximately every 100 ft or so. The cost of this infrastructure is significantly more than that of pagers or walkie-talkies which primarily use one local transmitter to broadcast messages. The infrastructure costs of wireless phones may also be too expensive for retrofits. Voice over IP (VOIP) phone systems have the advantage of using your existing Ethernet infrastructure (if you have it) but the individual phones are even more expensive than the already expensive wireless handsets. Wireless phones also require more frequent battery recharging. One very useful feature of wireless phones is that you can lock down external calling so staff use them to talk to each other and not their kids at home.

The latest greatest option for hand-held devices are call system apps that run on WiFi enabled devices such as the iTouch.  Some of the

more advanced call system providers are offering apps such as Vigil Mobile that allow your care staff to receive call system alerts and also allow for two way voice communication through the app.  Other advantages to call system apps include the ability for staff to review calls that have already been answered or to notify coworkers they are on the way to a call so that not everyone is heading the same way at the same time.  Call system apps are also a great way for management to stay in touch with what’s going on at the community from home or anywhere.  As with any app, it is dependent on your access to the internet.  If your staff are carrying WiFi only devices you need to ensure your WiFi coverage is thorough and high quality. You also need to be aware that these apps rely on full time internet access so you need a highly reliable internet connection in your building.   From a cost perspective, assuming you already have an excellent WiFi network, you are really just looking at the cost of the device and likely a licensing fee from the provider.

Call system apps offer advanced features compared to other options, as long as your internet connection and WiFi network are highly reliable.

Factors that will affect your choice of hand held device include; the size of your building, whether you have in house qualified IT people, and of course your budget. For more comparison details, including pros and cons as well as budgetary information check out our Call System Device Comparison Chart.

Technology is constantly changing and so are the features available for senior living communities. This blog will keep you up to date on new trends, what’s available now and what to look forward to in the future.

Ready to learn more about how the Vigil System can meet your needs?

Fill out the form below and we will contact you to arrange a demo.